Home is where the heart is...

Small Sprog looked longingly at the house. "Can't we stay Mummy?" he pleads as I carry on packing boxes. "Not really" I say, "It's not really ours to keep"

That was over a week ago.

On Monday we went back to the old house to pick up post. The place, which I have to admit did feel so much like home as soon as we'd moved in last year, was completely empty. It even smelt different.

It's almost a privilege to be able to return to the old home once you've decamped to the new. Not always possible to say your goodbyes to the inside so thoroughly.

Tall Girl went to look at her room while Small Sprog sat on the kitchen work top. She came down again "It doesn't look like home any more" She said, almost disappointed.
"The other house feels like home now" Says Small Sprog, "It's got all our things in it"
Which just goes to prove, I guess, that home is what you make it.

I'm really glad they feel they have a new home now and not just a new house. For me it all still seems a bit unreal.

Almost back to normal 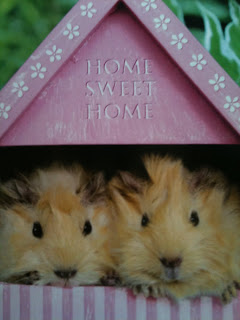 We've been here a whole week. It was exhausting but all that has passed now...

The last things to pack before we moved was the children's soft toys. They have always had a small selection of truly loved ones on their beds. Into the box they went, that same box that the soft toys had arrived in, just over a year ago, the one the children had written all over; 'this way up', 'live bears do not crush'.

I remembered the year before, when we were moving out of the family home. They had created the box then, chosen their toys, split them; some for Daddy's house, some for ours. It had broken my heart, toys that had settled on their beds since birth were lovingly divided, the deed was certainly significant.

This year it was only harrowing for the inhabitants of the box! Poor furry toys, all crammed into their temporary cardboard home.

However, not all the toys had made it into the box

When she was a baby, Tall Girl was quite unsettled. We tried all sorts of things to try and settle her, one of which was to buy her a soft toy to clutch; Larry, Fat Larry actually, named after the '80's group. Larry the Lamb was a hit, she loved him, so much so that she wouldn't sleep or go anywhere without him. So much so that we had to buy 2, just in case.

Anyway, Larry is still with us (luckily one for each house!) and she still swears she can't sleep without him, though he is a shadow of his former self, 14 years older and slightly bald in places, not exactly fat any more either. We have a family joke that she will wear him about her person as she goes down the aisle. She says she will wear him on a tiara!

So as I was checking all the last minute things before the removal van arrived, I walked into Tall Girls room and closed all the drawers of her bedside chest. The removal men would move as many chests as they could, contents intact. As I checked the top drawer of the chest I could see a little beige leg poking out. I opened up the drawer and there was Larry looking up at me. I smiled. She hadn't trusted the box with her treasured cargo, oh no, the box might get lost en route (though we have only moved a few streets away) but the chest would surely get there, and so, therefore, would Larry...

Tomorrow the children go to Cornwall with their Dad for a week. I will miss them dreadfully, I used to love having them all to myself for the long school holidays while their Dad was at work. Tonight he has texted her to say that he has packed all their things. I asked her if she had checked with him to make sure he'd remembered to pack 'The Other Larry'. "Oh!" she says, clutching her phone "Capitals at the ready!" and off she goes tap tap tapping with another text to her Dad.

Today I am moving house. After so much waiting it seems quite unreal.

See you on the other side, internet connection permitting!
Posted by Suburbia at Monday, April 11, 2011 11 comments: