Lovely Man's brother arrives bearing gifts; a bag full of beer bottles and a box of Krispy Kreme doughnuts for the children - the doughnuts that is, not the beer. There is also a vague smell of fish in the room...

Small Sprog is upstairs at this point glued to a screen.

As Lovely Mans' brother is leaving I call up to Small Sprog to say that someone has brought a gift. No reply. Sometimes I despair of that boy, life seems to pass right by him when he's in cyberspace.

Later on he comes downstairs expectantly. "What are you after?" I ask
"A doughnut" he replies
"How do you know there are doughnuts?" I say
"David brought them" he says with a grin, 'and he brought beer as well as a big bag of cod"

This is the boy to whom I have to bellow up the stairs at least 4 times before he will come down for a meal. In reality though, nothing gets passed him and he has perfected his cover.

Scary to think what he really hears when you think he's not listening ... no, I'm not even going to contemplate!
Posted by Suburbia at Monday, November 19, 2012 9 comments:

Big Knickers and The Germans

I am watching Telly with Tall Girl tonight, drinking in the last few days of the school holidays and the feeling of seemingly endless time which, inevitably will come to an abrupt end on Monday morning. We watch an advert between programmes for some sort of ladies underwear that 'sucks you in' (no guffawing please!) and we mutually decide that it looks vile and vaguely reminds us of the part in the film Bridget Jones Diary where Hugh Grant starts to undress her and Bridget is embarrassed because she has her 'Big Knickers' on.

Later....
It becomes an evening where we are all on devices with screens. Tall Girl and I watch  Me and Mrs. Jones on iPlayer, Small Sprog is watching something (goodness knows what but it makes him giggle intermittently - I really hope it's clean) on YouTube and Lovely Man is watching something on the Apple Mac.
"What are you watching?" Small Sprog asks Lovely Man inbetween clips
"Colditz" He replies
"Cold Tits?" Giggles Small Sprog loudly before putting his earphones back in and returning to what-ever-it-is he's been chuckling at.
I am dismayed!

Honestly,sometimes you have to live here to appreciate the fineness of the moment! 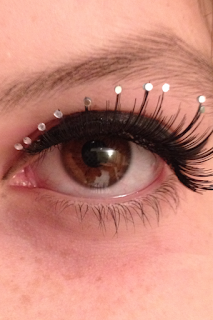 Tall Girl is excited. She has a party to go to. She lives a quiet life really -thankfully- and party's are not run of the mill, yet. She has been planning her outfit for days, no weeks, and at 3.30pm she starts to get ready, the party is not until 7.30.

At intervals I am called upstairs for a fashion second opinion as well as to help with crimping the back of her hair; I am aware these are special moments to treasure and I will.

Later she comes down stairs fully made up and ready to roll. She looks fantastic, false eyelashes and all - she has been saving these for a special event - Sweet Sixteen is only 9 days away.

My job, obviously, is to play taxi driver. We leave home at seven and pick up one friend before driving out of town. I am conscious to stay fairly quiet and leave them to their conversation, the rule has not been stated but it hangs in the air.

Within 20 minutes I have dropped them off. It is a house party, no boys have been mentioned and parents are at home. She is due in after 11pm, however she has managed to secure a lift, which is a relief.

We drive home, Small Sprog and I, "It's just you and I now" I chirrup
"Hooray" he says less than enthusiastically!

During the evening I resist texting her to see if she's having a good time and just hope that she is instead. I also try not to fall asleep and the TV, as usual, is not providing any material to aid the situation. Then, just as I become riveted to a fairly basic documentary, there is a knock at the door. She is home.

I wave off the parent who brought her home and welcome Tall Girl in, she looks exhausted but is chatty, very chatty, and very slightly slurred. She confesses to having some Smirnoff Ice. I am not cross, but puzzled as to where it had come from. Apparently some of the girls came with alcohol that their parents had provided. Tall Girl is nearly sixteen but most of her friends are still 15 until spring or summer next year. Am I being prudish I ask myself inwardly as she babbles on excitedly? I think back. I was drinking at sixteen, I was working at sixteen too and I can remember thinking, at that age, that I was now an adult.

"I knew they would have alcohol" she says "But I didn't think you'd let me go if I'd told you" I assured her I would have but would have asked her to be careful. Instead we had the same, 'be careful' conversation before she went to sleep. She is reasonably sensible and I will talk to her again today, when she emerges.

So, it was gone midnight by the time we both got to bed. At 2am Small Sprogs alarm went off! Something to do with him taking out the batteries earlier in the day in an act of desperation to make some electronic device or another work. It takes a while to work out what is making the noise and I nearly walk into his room naked in my dazed and confused state. He is sitting on his bed looking puzzled "I can't turn it off" he sighs. I sort it out and return to bed. Never mind, it is Half Term, no need for an early morning. A lie in is definitely on the cards.

At 8am this morning Bristol Water start to dig a hole in the road just outside our house. Tall Girls room faces the street. We all stagger out of bed and look out of the window, muttering profanities under our respective breaths. Divine retribution? Tall Girl looks like something from Michael Jackson's 'Thriller' video and I have to remind myself that Halloween is now over. I make a mental note to have a talk to her about make-up remover and skin care at some point.

The cat runs up and down the landing as the vibrations confuse his dementia and it begins to dawn on me that this might be a very long day.
Posted by Suburbia at Thursday, November 01, 2012 17 comments: