It's a cats life!

Thursday night I'm woken by the sound of banging and crashing downstairs in the hall. I listen intently, wondering whether to get up and explore or whether to leave it and be murdered in my bed. I fall back to sleep.

In the morning I wake up to find all the shoes, that are usually stored neatly under the bench in the hall, strewn across the floor. "Hmmm... I'm guessing the cat brought a mouse in and lost it" I say to Big Al who is somewhere else in the country working. I check the shoes and store them neatly again. Seems like the mouse may have met his maker elsewhere, as long as the cat didn't leave entrails in my shoe, life will be fine.

I'm in the pub on a Friday night with Big Al and my phone goes - a text from Tall girl who I left at home watching TV. "Mouse!" it read.
B***er! I thought. The little B*****d must have been hiding.
A photo comes through on my phone of the mouse, looking very much alive.
"Catch it in a sieve" I type. It was all I could think of at the time as wine had been consumed.
"I've shut myself in the sitting room" she texts back.
"But they can squeeze under doors" I reply.
"Oh"
"Big Al says Josie will catch it for you"
"Big Al is wrong" came the text after a few minutes.
"A job for Sam then (the boyfriend) when he arrives?"
"Sam doesn't like mice" she texts "they have one in their house too!"
It all goes quiet for a while. Then she sends a photo of the cat asleep with all his legs in the air - that's clearly not going to help either.

I start to forget about the whole thing when the phone pings again with a text that says "It's really fast!"
then...
"I don't like it!"
Then...
"Help!"

By this time tears were rolling down my cheeks and I assured her we'd be home soon. I text her to say this and to make sure the cat is out of the room and that the mouse is barricaded in as she wouldn't want to witness a massacre.

When we get home I put Big Al in the sitting room to catch the mouse. He promptly flicks on Match of the Day and sits down to watch it while the mouse hides under the sofa.

In the morning the mouse is stiff as a board under the kitchen table. I look at the cat. He's not taking responsibility for anything. He shrugs and moves on.

A walk around Mums Garden

I turn up with a bunch of Sweet Williams which we both sniff as I walk in and make the same disappointed face to. "Maybe they'll start to smell later" I state, though why they should do that I have no idea, but it seemed to make both of us happier!

I am at Mums. I am able to walk here, now we live so close, but it seems I see less of her now than when I had to drive an hour to get here. Odd really, but maybe it has to do with avoiding the stepfather, which is possible now that I don't have to stay for a whole day.

It is lovely here in the sun. I get two deck chairs out of the garage, directed by Mum, who always despairs about 'the state of the garage'. Anyway, I arrange them in semi-shade on the grass before realising I'd arranged them around the fish...yes, that's right, not the 'fish pond' but just the fish - last nights leftovers left out for the birds! Blatantly crows don't eat fish skin, and who could blame them? The shiny skins glistened in the increasing heat of the day. I thought about removing them but then Mum decided that we could just move the chairs a bit further away, so we did but the skins kept distracting me in a disturbing way, like some sort of macabre art installation.

We had a little 'tour' of the garden. It did look lovely, with lots in bloom and potential for lots more. I miss my garden at these moments especially as so much of Mums garden was also in mine so would also have been in bloom now.

We looked at the new roses, which were perfectly manicured and the Iris - not so good this year - before hop skipping over the fish again to look at the Hostas.
"The slugs are eating them" squeals Mum.
"You can't kill the slugs!" I say, "they could have been someones mother" - perhaps I have spent too long at the Buddhist Centre recently.
"But they're eating all my lovely plants!" she says as though in pain.
"They can't help it" I say "that's just nature."
"I wish they'd just eat the weeds instead" she says exasperated.
"I don't think the slugs can tell the difference between a 'weed' and a 'proper' plant Mum"!

She starts a mass massacre of greenfly on some buds elsewhere in the garden and I look on mournfully having resisted rescuing my pansies recently from an infestation of white fly (reincarnated mothers!) but instead watched the white fly massacre my plants.
Posted by Suburbia at Tuesday, May 30, 2017 6 comments:

How do you count the passing of time? For me it has always been through the growing up of children. Not always my own. Years ago my very good friend had children before I'd even thought I'd ever be a mother and watching them grow back then, that was my marker of time. One of them has their own children now - all so strange in a way - it's part of what we are here for as a human race, yet the passing of time is not an even flow, where does it all go?

Last week I met up with a few of my anti natal group. All of our oldest children are now 20, were 20, within 6 weeks of each other. It's a strange mix, that group. We all get on but we are all so different and the only way we know each other is the fact that we conceived within weeks of each other and lived in the same district nurse area.

Years ago when we managed to leave the 'ankle biters' for the night - which was never easy - we used to exchange birthing stories! No, really, there's somethings you can only appreciate with certain people and we all knew each others stories well. This week we talked about the menopause! Yep, that's how long it's been.

And here's the real reason for this post. This week it's Small Sprogs birthday, he is 17. So how did we come this far? We have had a family day with Laser Tag and pizza to celebrate early. Everyone attended as did a new comer - Tall Girls first boyfriend. I love the way we have so many more people in our family now and the love is very tangible whenever we get together, I am truly blessed.

So, 17. Its only a year since I wrote this post  and we were still living in Bristol, just the 3 of us and I wasn't married quite yet.

Every year, at poignant times, I do the looking back/looking forward thing. I do it much less often and I can't remember the last time I did it with regret. At the moment I do it with pure wonder. How did I get here? How did I get us all here?

These days its not all up to me. Big Al is great at planning and I can take a back seat with the worrying too. I guess somethings are meant to be? Do we make our own future?

How do you count the passing of time? 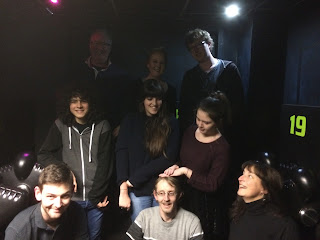 In which we look for something that is lost...

We turn up at Mums at about 11am. I ring the bell. She's in instant panic mode even though she knows we're coming. "I've lost Tall Girls 'speciality' tea!"she exclaims.
"Never mind, I'm sure we'll find it" I sooth.
"But she gave it to me for Christmas" she said.

She's often flustered these days, she's always been good at loosing things but now she panics more about it. The other day she lost her car keys, they had fallen out of her pocket into my car, and it was very nearly too much for her. Of course there have been times in the past where she's left her purse on the bonnet of the car and had a couple of hours elsewhere before missing it, only to return and it still being there - goodness knows how that happened. And remember the Christmas presents that survived a short journey on top of her car instead of inside?

Anyway, she boils the kettle and we start to look for the tea.

Tall Girl reminds me it is in a bright orange box - you'd think that was difficult enough to lose but nope. We searched every cupboard in the kitchen and then took to looking in other rooms too, even the bathroom, but to no avail. What had she done with it? We give up. We both have a sneaking suspicion that she's thrown it out by mistake.

Our time there passes pleasantly and we all resign ourselves to the fact that the tea is missing and may never be found. It's like there's a whole Bermuda Triangle somewhere in that house.

Turns out she'd forgotten she'd decanted it into a jar and put it in the food cupboard. Quite sensible really, if only she'd remembered.

Still, I opened the dishwasher last week to put in some food that needed to be kept cold! Well it was almost the fridge!
Posted by Suburbia at Sunday, January 22, 2017 2 comments: