An Xbox. He wanted and Xbox and that's what he got. Well we all have it really, it's not been off for more than a few hours overnight and I reckon I could hear the bullets firing in my sleep -or is that just the noise of living in the city?!.

Apparently it's his best (and only this Christmas, though he didn't seem to notice that bit) ever present, though I have to say I have my reservations, we only have a small living room and we are currently all in it. Small Sprog  is on the small sofa with the slightly deaf -luckily, as his head is inches from the speakers on the telly- and grumpy cat. Small Sprog is shooting Spartans randomly and has been banned from having the sound up when his sister is in the room! On the other side of the room, lying out on the sofa bed which Lovely Man assembled for me, I am nursing a head cold which Santa kindly gifted to me on Christmas day. I am still unwashed and undressed -though sporting a fluffy dressing gown which renders me more like a marshmallow than a stylish 40 something I would like to - delusionally - believe I really am! Next to me is Tall Girl sporting one of her many Christmas lounging type outfits, this one, a blue and white striped onsie, vaguely reminds me of a convict suit though she prefers to imagine it as looking 'Very French'. Lovely man is sitting on the bean bag as the last remaining chair is squashed behind the Apple Mac(which doesn't usually live in the middle of the room) on which TG  and I are watching catch ups of Christmas comedy which we only watched yesterday. There is a pile of tissues next to me and TG has crumbs down her Onsie which she informed me would be OK as they would drop out by her ankles later should she ever leave the sofa bed today. Lovely Man has made us all lunch, I have been spoilt and although this is not necessarily how I imagined today would go, it is, without doubt Boxing Day bliss... Well maybe not for the cat but hey ho, you can't please everyone all of the time.

"Oh look, I've got no Jelly Beans left" Small Sprog says gleefully with a sugar induced grin. There's a fairly spacious box of chocolates near my feet and I slyly attempt to pull it towards me using the duvet as leverage.While he is shooting things he is randomly shouting out phrases from the most recent Out Numbered Christmas Special - as if I don't already feel as though I live on the set of that particular sitcom already! If only he could remember his school work like that rather than a handful of random one-liners.

Tall Girl wanders off to wash her hair- and use all the hot water I anticipated using in my bath-before she gets to work with her new 'Styling Wand'.

Lovely Man at last gets a go on his Apple Mac and the cat gives me a look that could kill as I do an uncontrollably massive sneeze - I knew he wasn't that deaf- curls up again and puts a paw over his ears - like that's going to stop the rain of bullets firing just above his left ear.

And so life goes on 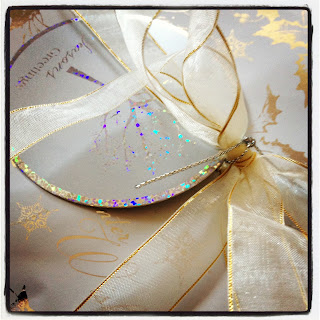 Small Sprog is bouncing off the walls, as usual at this time of year, there's only 3 hours left until 'The Big Day' and if he asks for a present one more time I'll explode and so will his sister. At the moment he is in a sugar filled rush resulting in an explosion of energy and random noises. He managed a whole packet of Jelly Beans before I realised what he was up to...this evening may be Very Long!

We have just spent the day with Mum, (the cause of the Jelly Beans meeting with Small Sprog in the first place) we have opened gifts together as she will not see us on The Day and she has fed us well.

While we sat around the dinner table talking, laughing and generally messing about, for some reason the topic of conversation turned to lesbians!
"Of course you can still have a baby if you're a lesbian!" I state
"Well, yes, I suppose you can" She admits "But Elton John couldn't have a baby could he?"!
"But he's not a lesbian!" we all chorused.

Sometimes conversations with my mother are so random!

Anyway, the presents are wrapped, the shopping is done and here we are, another year nearly done. I am thankful for so much, what a brilliant year we have had.


Meanwhile I wish you all a
Very Merry Christmas and a Happy New Year
full of all the things you would wish for yourself.

Vile but Festive Small Sprog post (not for the faint hearted!)

I picked the children up from the freezing bus stop at 3.30pm. Small Sprogs eyes had that look of mischief in them, the look that I recognised long ago almost from the day he was born. He's 'cooked up a plan' I thought as he grinned his way along the icy pavement toward me.

He'd only just managed to get his body in the car, and his sister was still struggling with bags when he pipes up "Jacob and I thought of a joke today!"
"Really" I say, not as a question you understand but more of an-Oh My Goodness do I really want to hear this?-sort of a way.
"Yes" he says, "do you want to hear it?"
I try to ward off the impending moment of disclosure by striking up a conversation about school.

Warning...if you are not up to the rude, vileness of 13 year old boys then read no further, he really is disgusting...

"Do you want to hear it?" he insists
"Not really" I state knowing full well that it will fall on deaf ears.
By this time we are home and through the door.
"Jingle my balls bells and I'll give you a white Christmas"! he shouts out and then runs off up the stairs.
"Eww" I shout up after him
"Jessica laughed her head off when I told her" he shouted down before disappearing into the bathroom.

"You told a girl?" I look at his sister who rolls he eyes and says something derogatory about men in general. She was in a fairly depressive mood what with mock exams, coursework and the cold weather and I did think, at that moment, that the evening could go either way.

I mean, he might be vile but at least he's festive!
Posted by Suburbia at Wednesday, December 12, 2012 7 comments:

Small Sprog has completed his Christmas shopping; in like a ninja and out like a Bargain Hunter on the first day of The Sales. He loves it, shopping with purpose, thinking of what people might like, making decisions. He is generous to a fault, he was born that way, I think I may have mentioned it before.

As we pottered around the gift shop he found the perfect little cream jug for Granny, and something appropriate for Lovely Man. As we browsed further he found a pair of socks that were black with white words saying 'Bah Humbug'. "These would be good for Dad" he giggled.
"You don't think it will offend him?" I ask. Small Sprog looks at me
"Do you think he will be?"
"I'm not sure"
"I'm going to buy them anyway" he decides. Very apt really, I think to myself...

This year Ex is having the children the day after Boxing Day for a week, however he has already told them he's not going to bother with a tree. When Tall Girl told me this it made me sad. When he picks them up and takes them home on 27th surely that will be their Christmas with him? He can make it special and they will still have presents to open (though they may not be surprises as he's not great at buying presents). And as well as feeling sad I feel miffed. If he's not going to have fun with them then why have them at all? I'd really like to spend more time with my children over the holidays as we finish school so late this year.

Recently I have had the feeling that they are more reluctant to visit him, just a little, it is barely perceivable, they are far too loyal to say they don't want to go. Yet I've picked up on bits of conversation; "we won't be doing much this weekend. Daddy watches sport on the TV all day" those sorts of things.

I have come to the conclusion that he has forgotten to cherish them. So many reasons why I left him; a leopard never changes his spots...

It's beginning to look a lot like Christmas in suburbia, and it's feeling good.
Posted by Suburbia at Wednesday, December 05, 2012 8 comments: