I was bringing the 'not so small' Small Sprog home tonight when we stopped at a junction to let some young women cross the road. His running commentary is as follows...
Fake tan, check
Big lips, check
Lots of pink, check
Bad accent, check!
We laughed - appropriately or not!

He overheard this recently, said in a true Bristol accent:
"E bited me!" -child to mother
"E bited you?" -mother to child!

That is what he meant by bad accent...have I raised a snob or a boy with sharp social commentary skills?!

The Girl, The Hamster and The Five Bodyguards!

So Koko the new family cat is settling in, he has his own unique personality and considering he's around one hundred years old in cat years, he's not as grumpy as he could be though he does have a bit of an old mans face! However, the last few months of his life before he came to us were pretty miserable and when I picked him up from the rescue centre, four weeks ago now, I was slightly shocked about the dull sad look in his eyes. Now if you're not a 'pet person' you will think I'm mad, but he did appear depressed. Four weeks on and he's slowly coming out of his shell, he is more sociable and recently has been more 'interactive'!

Anyway today he needed to go for a blood test. Honestly Stinky Cat hardly cost a thing, he was free to a good home and only needed the vet at the end of his life; we probably could have sold the copious methane output from his rear end at a profit too. In contrast Koko has already cost a fortune - though is far less stinky!

So off we went to the vets, Koko vocal all the way. When we arrived the waiting room was fairly empty and, as usual, reasonable quiet. However this didn't last for long, the door opened and in walked a pretty girl in her 20's carrying a small rodent in a carry case no bigger than her cupped hands, shortly afterwards in came her friends, 5 of them, all blokes and very bloky at that. It was a hilarious situation, one small hamster and several burly blokes, I mean what were they doing in there? The waiting room is quite small and they practically filled it single handed. I watched intently as their body language showed their discomfort in such a small and quiet room, and this discomfort oozed form them in noisy macho posturing, it wasn't at all aggressive but a little embarrassing to watch. I looked at the nurses on the desk, they were trying not to laugh as was I though Koko wasn't really concentrating.

When it was time for Koko to see the lovely vet she commented on the noise level and I told her about the girl, the hamster and the 5 bodyguards - anyone would think she had a dangerous dog out there. The lovely vet giggled "Oh my goodness" she laughed "I hope they are not waiting for me" (there were 2 vets on duty)

As I was leaving I noticed that out of the 2 pets waiting, the small dog went into the other consulting room. I looked at the lovely vet "I think they are yours!" I said and she walked back into her room barely able to hide her giggles.

Over by the animal weighing scales there was a sign asking parents not to let their children play on the equipment. At that moment three of the blokes decided to see how much they weighed, standing on the scales one by one. I had to look away...Well I guess they didn't have their mums with them did they?
Posted by Suburbia at Wednesday, September 19, 2012 9 comments: Mum was here. It's always a bit of a lottery when she visits but this took the (dog) biscuit...

We were having a conversation, all of us together, about lovely man who had eaten a dog biscuit in a moment of bravado the other weekend - shortly followed by stern looks from me. Why stern looks you ask? Small Sprog is my answer, I mean, as if he needs encouragement into silliness.

And suddenly, as we are discussing dog biscuits Mum chirps up "Well people eat tinned dog food sometimes don't they?"
We looked at her questioningly "No one eats dog food as a matter of course"
"Yes they do" She was adamant
"No" I argued "It's dangerous. Don't they say you can get salmonella from tinned pet food?"
"No"
"Well who exactly would eat dog food as a regular addition to their diet?"
"Asian people"
I gasped. How could she? "Two thirds of the world then?!" Sometimes I am ashamed! 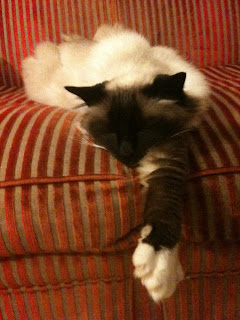 "Oh Billy!" She always calls me that, and this intonation is an exasperated one, "Think of all the vets bills!"
"He's an indoor cat" I say "At least he won't get into fights with other cats and cost a fortune in antibiotics"

Tall Girl and I climb into the car for a 4 hour round trip to pick him up, we are full of hope and potential love. There have been many conversations before this point, mostly with the crazy cat lady who owns the 'safe house' where he is currently residing. "I'll tell him you're coming" she says on the phone the night before - scarily I think she probably did.

We arrive dead on time with Tall Girls fine navigating skills and a sat nav; two straight lines really M4 and A34, and it was just as well they were straight roads as the silly thing stood up most of the way home, with his strangely long and gangly legs - permanently pointing at 'ten to two'- slipping about at any bends in the road.

He grumbled his way home for 2 hours, a gruff scratchy voice, much like Stinky Cat's, and I wished I could tell him everything was going to be ok, or at least that he would understand that it would  be.

So here we have him, a 16 year old bag of bones covered in fluff, knotty fluff at that, with a slightly grumpy demeanor! He comes to us as a house cat and to be honest Trading Standards would have a field day with the description given by the rescue centre... Chunky they said - boney he is! Indoor cat they said - out of the back door like a shot on the first day he was! Can be chatty they said - goes off like a car alarm at intervals during the night he does.

Meanwhile I am starting my new job tomorrow and having a massive crisis of confidence, where did all those weeks of school holiday vanish to?
Posted by Suburbia at Sunday, September 02, 2012 8 comments: